2022 Hall of Fame and Special Recognition and Award Banquet

R.S.V.P. to Karen Cantele at K.cantele@comcast.net

This prestigious group is comprised of area Italian Americans who have made significant contributions to the community. These men and women have shown a tremendous amount of dedication and leadership. Inductees are nominated by the community and selected by the Hall of Fame and Special Recognition Committee annually.

Nominees should be persons of Italian heritage whose exemplary lives have made significant contributions to the community in the arts, sciences, government, business, industry, education, volunteer, civic and philanthropic activities, or any other category that is appropriate.  Such contributions should reflect a notable community impact and highest standards and ideals. The primary difference between Hall of Fame and Special Recognition consideration is whether the nominee has significantly impacted the Italian American community.  Hall of Fame nominees should be individuals who have made an overall positive impact in the Italian American community.  Nominees who have not significantly impacted the Italian American community but otherwise meet the criteria mentioned above will be considered by the committee for Special Recognition honors. It is not necessary to indicate on the nomination form which category you are nominating the individual for.  The committee will make that determination based on the information provided.  If you have any questions, please use the contact form below.

If you would like to nominate someone for the Italian American Hall of Fame or the Special Recognition Award, please read the criteria for these awards listed above and then click on the nomination form link below: 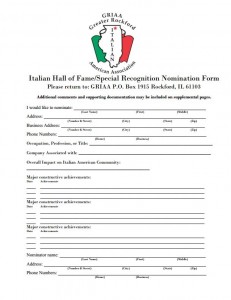 Alex Pumilia-Sagona is presenting is grandfather at the 2012 Banquet

Carla Mullin and Pauline Urso receiving the Italian American Hall of Fame Award for The Amici Italiani Youth Troupe from Whitey Marinelli at the Banquet on Saturday October 6, 2012

Amici Italiani Youth and Adult Dance Troupe with the directors of the troupe after receiving The Italian American Hall of Fame Award on October 6, 2012

Presentation by Frank Perrecone at the Columbus monument in the St. Anthony Church gardens.  Next to Frank is Whiety Marinelli, Ben Todaro and the Amici Italiani Dance Troups.