Ferentino a city is a city of 22,000 people; it is an ancient per-Roman-era walled hill town 45 miles southeast of Rome. Ferentino has origins in the eighth century B.C. and boasts of three distinct important periods of architecture. It once was home to Catholic bishops who entertained popes and emperors. The city is famous for its many Roman ruins, including ancient markets, theaters and distinctive stone gates. Its major industries are Henkel soaps, cheeses, electronics and gelato. The popular Baths of Pompey natural spas are nearby.
A grand procession and holiday, the Feast of St. Ambrogio, venerates its patron saint annually on May 1st. Numerous cultural festivities occur throughout the year through the Pro Loco Association, its local governmental arts, history and cultural organization.

On May 15, 2006 Rockford and Ferentino, Italy signed the Sister City agreement solidifying a connection between our cities that has endured for more than 100 years. Mayor Lawrence J. Morrissey welcomed a delegation that included Ferentino’s Mayor Dr. Piergianni Fiorletta to Rockford for the signing of the agreement, which will promote economic cooperation and trade, and carry on exchanges in the areas of business, technology, culture and education and health.
Mayor Fiorletta and his delegates enjoyed touring the many businesses, museums, Italian Clubs and the Cathedral of St. Peter School where the Italian Language is taught. The Sister City committee planned a whirlwind itinerary for the group. Sig. Pietro Scerrato from Ferentino took many photos of our community and these may be found in the Festa Italiana newspaper, and on line at http://www.scerrato.it/rockford/index.html

It is estimated that 300 families within the larger Italian-American population in Rockford trace their roots to Ferentino, located in the province of Frosinone in the Lazio region. “We have several community leaders who have ties to Ferentino. For us, this is formalizing a link that has existed for decades,” says Cynthia Hall, director of the Mayor’s Office of Tourism, Culture and Special Events. 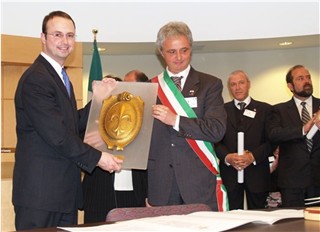 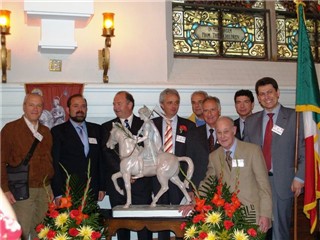 Mayor Fiorletta with the Delegation from Ferentino honoring St. Ambrose the patron of Ferentino. This statue is housed at St. Anthony of Padua Church